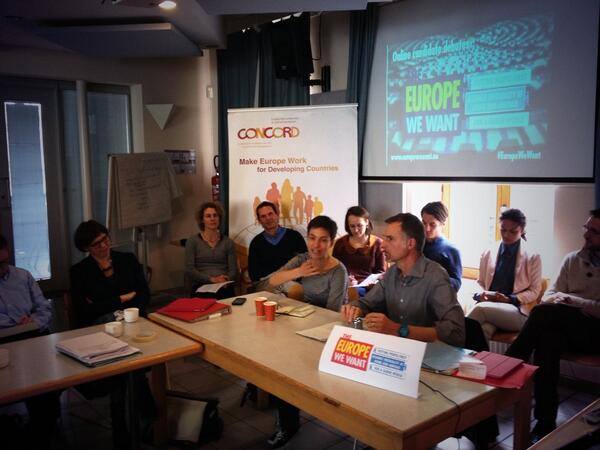 The first debate of the upcoming #EuropeWeWant campaign – which will hold talks with a diverse range of political parties – took place on 26 March, hosting European elections candidate MEP Franziska Keller of the European Green

s to debate with CONCORD members.
The debate kicked off with a presentation of CONCORD’s main calls ahead of the European elections:
For many European citizens active in NGOs and civil society, a major issue that Europe’s next politicians should tackle is inequality, both at home and abroad.
Participants noted that inequality has increased within Europe since the onset of the financial crisis and government moves towards austerity policies.
MEP Keller responded by saying this year’s European elections will be “key if we want to opt for a more social Europe”.

Several participants asked how EU policies could improve on their development record – an EU legal principle known as ‘Policy Coherence for Development.’
MEP Keller said that the European Parliament has made some progress in raising the issue via its Development Committee and new ‘Standing Rapporteur’, but many of the EU’s flagship policies, especially on trade and agriculture, still fail to give developing countries a fair deal.

While immigration is a big election topic in many EU countries, both at national and European level, MEP Keller said that “the majority of migration happens on a South to South basis” and says that those who do come to Europe “often lack legal protection.”
Further to this, MEP Keller added that for the Green Party, social justice is a key theme as they are seeking to reduce inequality within the EU as well as externally; particularly linking it to environmental justice, as the poor are more likely to suffer from the effects of environmental damage, such as air pollution.

Keller also spoke on the potential role of the private sector in development. Whilst she wasn’t against the involvement of private companies in development initiatives, she drew the line at giving EU funds to companies and projects that are already financially viable and turning a profit.

And finally…why should a skeptical voter, vote at the EU elections?

For the German MEP, the elections are a chance to build a new Europe, one “for the people, based on a more sustainable, green new deal.”
Watch a clip from the debate here:
http://twitcam.livestream.com/fz3wz