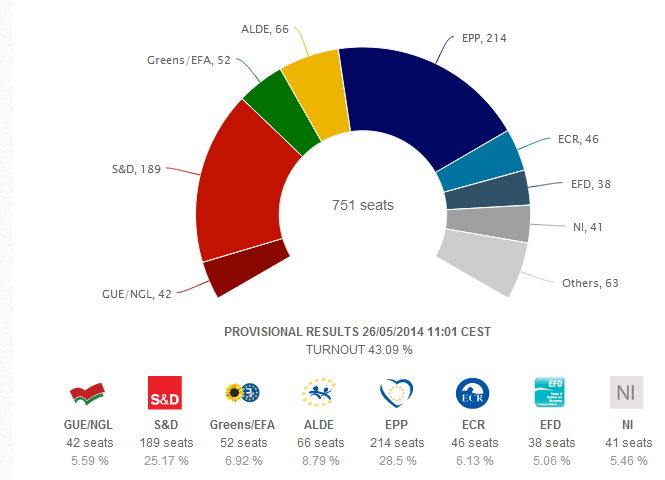 (Brussels, 26/05/2014) The results of the European Parliament elections held between 22-25 May have been marked by a rise in Eurosceptic and extremist parties, despite centrist groups coming out on top overall. The vote comes as inequality and poverty have been on the rise within Europe since the onset of the financial crisis.

Commenting on behalf of CONCORD, the European confederation of Relief and Development NGOs was Sabine Terlecki, Head of Policy:

“Europe’s role in the world, including support to international development and humanitarian programmes, could be affected in the new Parliament by the rise of more inward looking eurospectic and extreme right parties. Yet results show there’s still broad support for parties supportive of development cooperation who favour a European response to global challenges.

“The European Union has a strong record in international development, being the world’s biggest aid donor, giving some E56.517bn in 2013. We hope that all newly elected MEPs realize the importance of having a strong development and humanitarian policy.”

“In just seven months the official European Year on Development 2015 will take place, the first dedicated to external action. MEPs should use 2015 as a moment to really engage in a debate with the general public in Europe about our place in the world.”

“EU institutions need to regain trust with citizens, who want to be part of decisions and have a say in their future. As elected representatives, the new MEPs need to put people first and include the voices of its citizens through greater consultation and dialogue to create a truly representative European Union.“

The latest projections of seats show that neither party will be close to a total of 376 needed to secure their candidate for the European Commission Presidency and the bargaining behind the curtain already started last night. Backed up by the new EP, the new president of the European commission must ensure that there will be a strong High Special representative and development commissioner who see it at the core of their mandate to tackle the root causes of current and future global challenges.

All newly elected European Parliamentarians regardless of their political color received the mandate by the European citizens to seriously promote core values such as solidarity, equality, tolerance and human rights. Inequality, both at home and abroad, is one of the great challenges that we face today. The new EP must tackle the unfairness of tax fraud and avoidance, unsustainable use of resources and climate change.