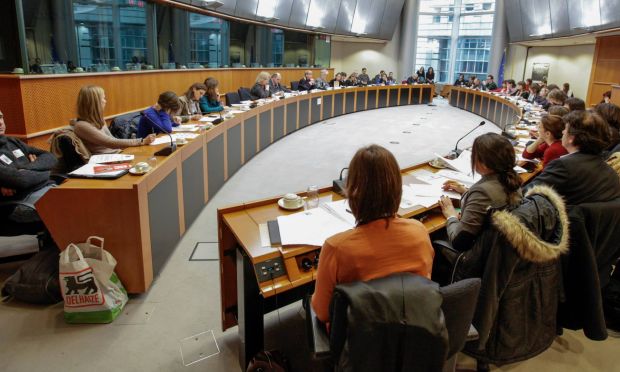 The recent “Pre-Election Dialogue” between child-focused organisations and elected members of the European Parliament was a big success. World Vision was one of the organisations involved in coordinating the event along with other members of the Child Rights Action group (CRAG).

So why did we want a “Pre-Election Dialogue” with Members of the European Parliament?

This a critical moment as the European Parliament elections are held every five years and will take place this year between 22nd and 25th May across the EU’s 28 Member States. These elections are important ones.

Over 750 new MEPs will be elected at a time when the European Union is struggling to emerge from the economic crisis that hit it over the past five years or so. The kind of candidates that are elected through these elections will influence the EU’s policies and decision-making over the next five-year period.

Europe is an important global actor. Together, the EU and its 28 Member States between are the biggest donors of international aid. The EU is also an influential actor in international trade, security, climate and other discussions where decisions with global implications are made.

The CRAG is targeting the European Parliament in advance of this summer’s elections and lobbying hard to see the new Parliament become a “global champion of children’s rights”. The EU already does a lot of good work on children’s rights, but its work lacks proper institutional co-ordination at times and could be significantly strengthened.

Therefore the 14 child-focused organisations involved in CRAG came together last year and developed a Child Rights Manifesto. The manifesto sets out very concrete demands for the European Parliament after the elections in May which focus on both the EU’s external and internal policies.

This manifesto was first launched in Strasbourg in November 2013. Marius Wanders, Director of World Vision Brussels & EU Representation, spoke at this event on behalf of World Vision, along with MEPs representing the different political groups in the Parliament, and other child rights organisations such as Unicef, Eurochild, Plan International and Save the Children.

The CRAG also developed a website for the child rights manifesto. Candidate MEPs can sign up to a pledge on this website to be a global champion of child rights if elected to the new European Parliament. They can also post a short video statement highlighting their support for a child-rights agenda. The website also includes a template of a standard letter that members of the public can send to candidate MEPs asking them to champion child rights in the new Parliament, if elected.

This manifesto is currently in the process of being translated into different European languages and will be disseminated to the national member organisations of CRAG so that they can also lobby candidate MEPs at the national level. Some of World Vision’s European Offices have already pledged to play their part and to organise lobbying and advocacy events to promote the child rights manifesto in advance of the European Parliament elections.

At the Pre-Election Dialogue, Members of the current European Parliament were asked to speak on behalf of their political groups and to say what they were prepared to do to make the European Parliament a stronger and more global champion of child rights if re-elected in May.

Five MEPs, all representing different major political groups in the Parliament, attended the dialogue and were all very convincing in the commitments they made to strengthen the role of the next European Parliament in promoting child rights within, and outside of Europe

CRAG intends to follow up these and other MEPs once elected and remind them that we expect them to live up to the commitments that they have made to be true child rights champions in the European Parliament for the next five-year period. In particular we are asking them to put in place a new parliamentary permanent mechanism of some kind to facilitate the mainstreaming of child rights in all EU policy and decision-making.

The MEPs who attended the CRAG Pre-Election Dialogue were very helpful in making suggestions about what that new mechanism should look like, and CRAG members will be reflecting on these suggestions over the coming weeks.

View photos from the event on our Facebook page!